In Tbilisi, at the age of 86, passed away an outstanding Georgian theater and film actor – Kakhi Kavsadze. At the end of November 2020, Kavsadze was diagnosed COVID-19, hospitalization, and connection to ventilation of the lungs was
required. In December, the clinic where the actor was undergoing treatment reported that he had recovered. However, in February 2021, Kavsadze was hospitalized with bilateral pneumonia. For two months the doctors fought for his life. On April 27, the actor died.

Kakhi Kavsadze was born in Tbilisi on June 5, 1935. His father, musician David Kavsadze, went to the front in 1941, was captured in 1942, and then in one of the concentration camps in Germany. After returning to the Soviet Union, he was
repressed and exiled to Siberia, where he died in 1952. For this, Kakhi and his brother Imeri, were called the sons of an enemy of the people, they were expelled from the music school for gifted children.

“My musicality comes from my father, and my artistry comes from my mother. I was always spinning in a creative environment, but I never wanted or thought to become an artist, despite the fact that I was very fond of theater and music. As a child, I studied at a music school and wanted to become an opera singer, but then I gave up music, girls appeared, I started to go in for sport&quot“.

After graduating from school, Kavsadze was going to enter the Polytechnic Institute, but unexpectedly he was invited to audition for a movie and was approved for the main role. 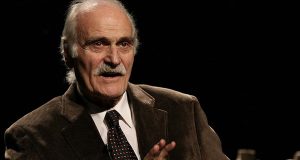 “I have heard that Georgians do not have to graduate from theatrical universities,
they say, acting is in their blood…”.

The film was called “hey Came Down the Mountains”. On the set, Kavsadze was seriously injured. As a result of an unsuccessful jump into the river, the actor broke six ribs, after which complications began, due to which he had to spend a year in bed.

I know because I didn’t do

“I know because I didn’t do this film, I became an actor. If I was acted in that film, I would satisfy my ambitions and would follow my classmates to enter the Polytechnic Institute. When I was admitted to the theater institute, all my
housemates – Khorava, Vasadze, and others – sat on the commission. “Well, to hell with him – if he wants, let him study&quot; – with these words I was accepted, and I very slowly and sadly began an acting career. “

“When I saw her for the first time, I lost,” the artist recalled &lt;…&gt; we lived together for 26 years, of which only three years she was healthy. We went to visit each other for a long time until my mother stopped all this. She once said to me: “Enough! Finish this case! &quot; – and we got married, ”Kavsadze shared in an interview.
During her second pregnancy, Bella Mirianashvili fell ill but went on stage with a high fever. After that, the actress fell ill, and after giving birth she was diagnosed with an infectious disease of nerve endings.
Kakhi Kavsadze and Bella Mirianashvili lived together for 26 years, of which Bella was ill for 23 years. And all these years Kavsadze was with his wife. Bella Mirianashvili passed away in 1992.
In 1959, Kavsadze graduated from the Tbilisi Theater Institute of Sh. Rustaveli and soon became part of the staff of the Tbilisi Academic Theater of Rustaveli.

All-Union fame brought the actor the role of Black Abdullah in the film “White Sun of the Desert” in 1969. The director Vladimir Motyl appointed Kavsadze’s movie auditions not in the pavilion, but immediately in the dunes near St.
Petersburg.
“For some reason, he decided that since I am Georgian, I must be an excellent rider. But I am a Tbilisi citizen, from a family of hereditary musicians; I have never come close to a horse in my life. And I have to ride in a circle, jump off the
horse, and then give my monologue. What to do? “Ah,” I think, “I wasn’t, I’ll risk it!” By some miracle, on a whim, he jumped on the horse, hit him with his feet, and … galloped. “
In 1974-1980 he starred in a cycle of short films based on scripts by Rezo Gabriadze. In 1981 he received the title of People’s Artist of the Georgian SSR. In the film of Rezo Chkheidze “The Life of Don Quixote and Sancho”, released in
1988, Kavsadze played Don Quixote. In one of the interviews, the actor said that back in the early 1980s, in the artistic environment, they began to say that Chkheidze was looking for a tall actor for the role of Don Quixote. Kavsadze
admitted that he was sure that the director would turn to him, but there was no invitation for a long time.
“A month passes, two, three, six months, a year – no, he doesn’t call. As if I was not in the world. One fine day I am walking along the corridor of the Georgia-Film studio and suddenly I meet Rezo. “Hello, Kakhi,” he says. – “How are you doing?” – “Fine, Revaz Davidovich, thank you.” We started talking. I see him looking at me intently, attentively. I ask: “Rezo, why are you looking at me as if you are seeing me for the first time?” And he answered: “Shall we try?” “What shall we try? – I am smugly interested. – Wine? Satsivi ?! ” – “No. Let’s try you for the role of Don Quixote. “

In 2011, director Nana Janelidze shot the documentary “Khaki Kavsadze. If there is a theater?! «In the film, with bitterness and humor, Kakhi Kavsadze talks about his life, about his family, about the country. The film was awarded the Nika Prize in the nomination for the best film in the CIS and Baltic countries.
The last work of Kavsadze in cinema was the role in the film “Tali and Toli” For this work, the actor received the Golden Crane award at the festival “Amur Autumn 2016”.
On account of Kakhi Kavsadze, many theatrical performances, and more than 80 films. “I will play anytime, anywhere, and everything,” said once the actor.